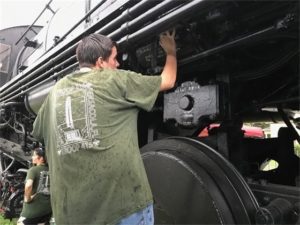 PENSACOLA, Fla. – Refurbishing and repainting an 84-foot-long, 588,890-pound, 107-year-old locomotive is no small feat, but that didn’t stop 17-year-old Zachary Panici from taking on the challenge as his Eagle Scout project.

The Tate High School graduate and Boy Scout chose to spend part of his summer fundraising, gathering volunteers and planning workdays to spruce up Engine 1355 of the St. Louis-San Francisco Railway Co., which has been resting on Garden Street since 1957.

Panici coordinated the project with the City of Pensacola Parks and Recreation Department, selecting Frisco Locomotive No. 1355 from a list of available volunteer projects in the city. Since starting the project in May, Panici has held five workdays with volunteers, logging approximately 200 hours of labor. He expects to wrap up the project by the end of the summer.

The work included scraping rust off the locomotive, cleaning and repainting the entire body, and repainting the stenciled numbers. Despite some rain, Panici and a group of Navy volunteers had a productive workday on Saturday, July 20, with  Mayor Grover Robinson stopping by to thank him and the volunteers for their hard work restoring the historic landmark.

“It’s fantastic to see Zach’s ambition and the level of dedication he has poured into this project,” Mayor Robinson said. “The Frisco 1355 is an important part of Pensacola’s history, and I can’t thank him or his team of volunteers enough for their efforts to bring it back to life and make it something we can all be proud of.”

Frisco Locomotive No. 1355 was built by the American Locomotive Works in 1912 and was rebuilt by the Frisco in 1944. It was presented to the City of Pensacola March 4, 1957 by the St. Louis-San Francisco Railway Co.

Before arriving in Pensacola, the freight locomotive traveled 1,148,535 miles – the equivalent of 46 times around the world.

Despite choosing one of the most challenging volunteer projects on the city’s list, Paul Pipes, the outdoor pursuits and volunteer coordinator for City of Pensacola Parks and Recreation, said Panici has gone above and beyond everyone’s expectations. 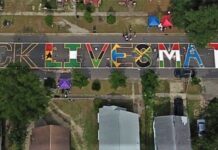 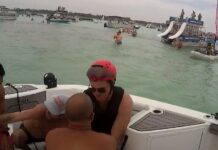 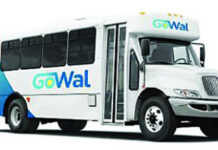 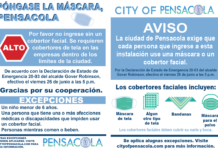 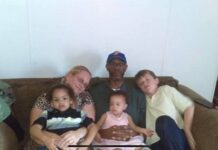